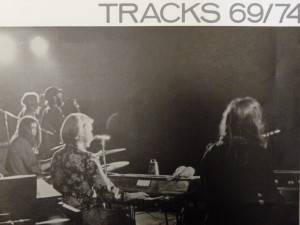 In the spring of 1969, my junior year at Dartmouth College, I dropped out of school to play full time with a rock band called “Tracks.” For the next five years, through various incarnations of the group, Tracks played all over New England in night clubs, fraternities, high school proms, and the occasional “big time” rock concert. We opened for acts such as the James Gang, Canned Heat, The Chambers Brothers, and Tom Rush, and by the time we broke up in 1974, we had recorded three full albums of original music. Although we had a couple of offers from producers, we never got signed by a record label, so soon after we called it quits, we made a triple album of our demo tapes as a “going away present” for our fans. The album is something of a collector’s item at this point and there are still some copies floating around in flea markets, or so I hear. The picture above is from the front cover of the album booklet. From right to left, it’s Ken Aldrich (organ), Ed Kistler (electric piano), Ned Berndt (drums), Bob Neale (bass), and yours truly on guitar. The picture below is from the back cover, and it shows the farmhouse we lived in for most of that time, in Hartland, Vermont. 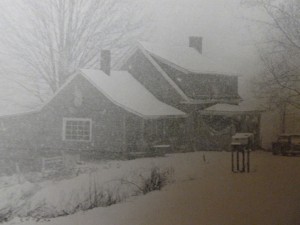 There was a barn right across the driveway, where we practiced and stored our gear. It was a great place to live and work, although as you can see from this picture, it could get pretty cold! But we had a big wood stove, a fireplace, a Steinway grand in the living room that we rented (for $25/month!) from a local music store, and a huge oak dining room table where we all ate really good food, because one of our roadies was also a chef! Those were the days! Here are a few more pictures from the booklet. I was fortunate to play with some very talented musicians during those days, who were also really great people: Ken Aldrich, Ned Berndt, Steve Calvert, Eddie Kistler, Peter Logan, Dan Morgenroth, Bob Neale, Dominic Puccio, Skip Truman, Jeff Wilkes, Peter Wonson, and our producer and mentor, Wayne Waddhams. About 15 years after we broke up, Wayne and Ned produced a CD called “The Very Best of Tracks,” which was released on the Boston Skyline label. You can still find a few copies of that for sale, if you look hard enough. In any case, I’ve put a few of our tunes up on Sound Cloud, with links below. Enjoy!

The last version of Tracks. From left to right: Ken Aldrich, Bob Neale, yours truly, and Ned Berndt. This picture was taken sometime in 1974, I would guess – about the time we recorded Ally, Pawnbroker, and Isengard, and played Scapegoat at the Bourbon Street East in Newport, RI.

Who is that masked man?

And a couple of live cuts from a gig in Newport, Rhode Island.